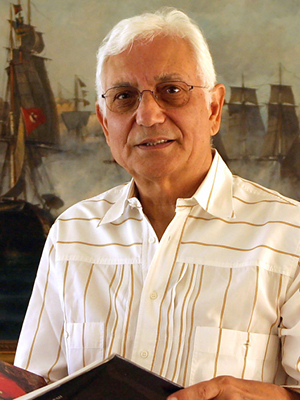 Evangelos El. Angelakos
Mayor of Oinousses, presentation of the Island’s maritime tradition. Oinousses will be the Honored Island for NAVIGATOR 2013.

Evangelos El. Angelakos is a ship owner and currently Mayor of the Oinousses Islands, next to Chios, known all over the world for their prowess in merchant shipping. He studied Naval Architecture at the University of Durham, Newcastle-on-Tyne, UK. He is married to Katingo with whom he has six children (four sons and two daughters). Continuing the tradition of the family in shipping, Evangelos founded Angelakos Ltd. in the City of London in 1970 and subsequently Angelakos (Hellas) S.A. in Piraeus. Initially, the enterprise owned general cargo tweendeckers. In the mid-70’s it moved into car/bulk carriers and by the mid-80’s it operated 10 vessels of that type. Thereafter, Handymax and Panamax dry cargo vessels were added to the fleet. In 1999 the enterprise embarked on a new building program by ordering 8 Panamax sister ships in Japan. The sons of Evangelos, the fifth generation in shipping, continue the family tradition and the commitment to maritime transport.

On the social front, Evangelos and his family consider it their duty to contribute selflessly to the community; this civic duty they have exercised in various forms. For the last 15 years, Evangelos devotes his time to serve the people of his home islands, Oinousses, as their elected Mayor. His motto is: “To give not to gain”. As a small example, he gives his Mayor’s salary back to the island. His aim, during all his terms in office, was to resolve problems, enhance the work ethic, promote the adventurous spirit and the creative mentality of the community. Ηe has built all the infrastructure necessary for a small island for the next 100 years (desalination plant, water and sewage system, new port, roads, etc.). He also placed great emphasis on organizing educational, cultural and sporting activities, in order to give the opportunity to the local community of a small island, far from the Greek mainland, not to lag behind in comparison with the townspeople. During his tenure many concerts, theatrical performances, seminars and Forums were organized on the island, where important Greek and international artists, scientists and men of letters took part. All these have been accomplished leaving the financial status of the Municipality with a substantial cash surplus in its reserves.

As a Mayor, he has governed in a meritocratic way, spoke and acted without fear for the common good, stressed the principle of self-reliance, as opposed to handouts, and did not follow a populist policy.

Vision Contributing to the advancement of the community at large and striving for a better world.