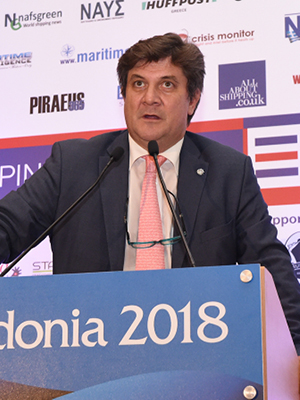 George Xiradakis graduated from the Nautical Marine Academy of Aspropyrgos-Athens and he holds a diploma in Commercial Operations from City of London Polytechnic and an MSc in Maritime Studies from University of Wales.
In his banking carrier (1991-1998) he served as Vice President of Credit Lyonnais Shipping Group and Head of European Shipping finance activities and as Head of Greek, Indian and Middle East Shipping. In 1999 he founded XRTC Business Consultants and since then he has been the Managing Director of the Company. XRTC acted as Commercial Representative of the French Banks Credit Lyonnais (up to 2004) and Natixis (up to 2008). Since 2009, XRTC has been working closely with the Chinese ship finance market. In 2011 XRTC signed a Financial Consultancy Agreement with China Development Bank. XRTC has won the Greek Shipping Financier of the Year by Lloyd’s List Greek Shipping Award 2010.
Mr. Xiradakis is a member of the Board of Directors of Paragon Shipping Inc (NASDAQ: PRGN). He also serves as the President of the Board of Governors of the International Propeller Club of the United States –International Port of Piraeus; he is also the General Secretary of the Association of Banking and Shipping Executives of Hellenic Shipping and a Board Member of the China-Greece Friendship Association. He is also member of Marine Club of Piraeus, HELMEPA, Member of the Mediterranean Committee of China Classification Society, Greece-China Chamber and member of President’s Advisory Council of American College of Greece. Mr. Xiradakis was member of the Board of Directors of DryShips Inc. (NASDAQ: DRYS) from 2008 up to November 2015, also was a member of the Board of Directors of Aries Maritime Transport, which has since changed its name to NewLead Holdings Ltd (NASDAQ: NEWL). Mr. Xiradakis also served as Chairman of the Board of Directors of Hellenic Public Real Estate Corporation and the first President of the National Center of Port Development.