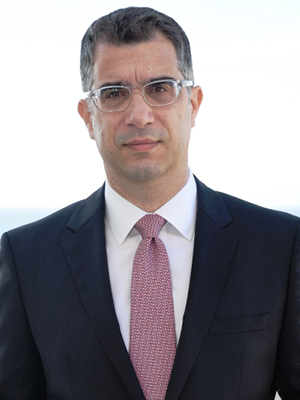 George Skrimizeas has been General Manager of ALLSEAS MARINE S.A. since 2005 and Chief Operating Officer of PARAGON SHIPPING INC. since 2006 and BOX SHIPS INCE. since 2013.

From 1996 to 2005, Mr. Skrimizeas has held various positions in Allseas, Eurocarriers and their affiliates, including General Manager, Accounts, Human Resources Manager, and Finance and Administration Manager. Mr. Skrimizeas has more than 30 years experience in the Shipping sector and has worked in Athens, Romania, Hong Kong and London based Companies.

He is a member of the Hellenic Chamber of Economics, the Hellenic Association of Chief Executive Officers, the Business Advisory Committee of the ICMA Centre, Henley Business School (Msc in International Shipping and Finance) and the Business Advisory Committee of ALBA Graduate Business School(MBA in Shipping, Msc in Shipping Management). He has also served as Governor, Member of the Borad of Governors of The International Propeller Club of the USA, Port of Piraeus and Member of its Maritime Committee (2015).

Currently he serves as President of the Executive Committee of the Institute of Finance and Business Administration of the Hellenic Management Association.

Mr. Skrimizeas has been awarded the 2014 “Quality Leader of the Year” Award from the Hellenic Management Association and the European Organization for Quality and was among the three finalists for the 2014 “European Quality Leader” Award.