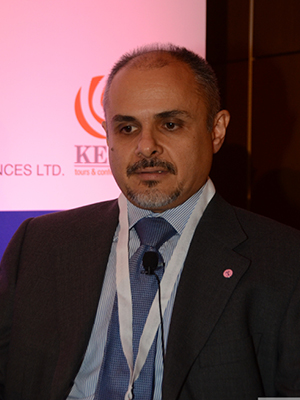 Spyros Zolotas is a Naval Architect and Marine Engineer, graduate of the National Technical University of Athens. After some further post-graduate academic experiences in Greece and abroad, as well as a period of employment with a major engine manufacturer, he joined RINA as exclusive marine surveyor in 1996.

At this position and after a training period at RINA Head Office in Genoa, Italy, he followed various projects of ships in service, as well as newbuildings in Greece, the Black Sea, Rotterdam, Istanbul and others. He is an ISO, as well as ISM, Security and ILO Auditor. From the beginning of 2004, Mr. Zolotas was appointed as Head of RINA Piraeus Office, responsible for the technical management of the Society and its network of surveyors in the area.

As from 2010, he has taken the position of RINA Country Manager, Greece, having today the technical and commercial responsibility of the area covering Greece, Cyprus, Lebanon and Israel.

Under his management, the presence of RINA in Greece was strengthened with the reinforcement of RINA Piraeus Marine, the establishment of the Engineering Center, the Yachting Team and recently, the Piraeus Training Center. Mr. Zolotas is the author of two technical books and various articles, member of the Royal Institute of Naval Architects and Chartered Engineer, as well as European Engineer with FEANI.