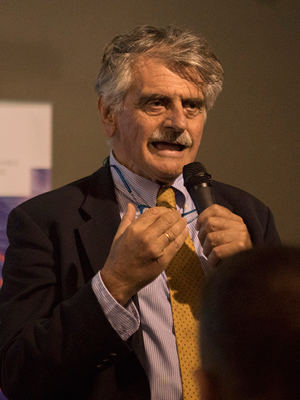 He majored in Physics focusing on the theory and philosophy of Science. He continued his post-graduate studies and research in systems analysis, control, cybernetics and complex systems modeling. He participated in cross-disciplinary explorations in the domains of naval architecture, fluid mechanics, thermodynamics, socio-economic simulation and planning.

He joined Thenamaris Ships Management Inc. about 38 years ago. As its Executive Director and Chairman, he is a member of its core governance team. He concentrates on the continuous improvement of people, systems, relationships and the overall results of the company. The corporate targets for safety, environmental stewardship, high efficiency and the role of the company in the wider domain, have top priority in his professional agenda.

He is involved in discussions of the wider maritime industry, as well as in active civic groups within his local and international community. He has particular interest for the stimulation of creative thinking, innovation and the creation of quality. The resolution of conflict, the building of trust and the improvement of synergies among diverse stakeholders are highly prioritized in his radar screen.

The regeneration of tradition, architectural heritage and bringing new life in deteriorating abandoned environments and physical systems, also absorb much of his personal time. In this context, he is a co-founder of Eco-Recreators, an organization dedicated to the salvage, preservation and creation of new sustainable life.

He was a member of the INTERTANKO Executive Committee and some years back he was representing the Greek tanker community in the organization, as the Chairman of the Hellenic Forum. He is the founding member of the creative team with the mission to spread the vision, values and the enthusiasm of the POSEIDON CHALLENGE. He is married and has two children, who are entering the early maturity of their professional and personal lives.