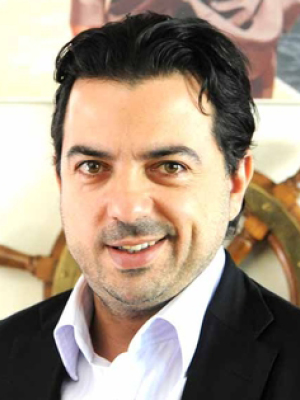 George Sp.Alexandratos was born in Athens in 1973. He had studied at Moraitis School and graduated with a Bsc in shipping business from Plymouth University and Msc in Maritimime Policy from Cardiff University. He is the director of Apollonia Lines sa which was founded in 1974 from his father Spyros who unfortunately passed away in September 2004 and that time his father apart being the founder of Apollonia Lines was also the president of the Hellenic chamber of shipping. In 2013 he etsablished together with co-partners the shipping fund called Blue water Maritime Capital targeting to invest in dry bulk shipping.

George is now the General Secreteriat of Hellenic Short sea shipowners association since February 2012 whlist during the period fm Feb 2009-2012 he was the second vice president. Also he is a BOD at the Hellenic Chamber of Shpping,bod at Korea registry and bod at the marine club. Since February 2014 he is the President of the Hellenic Hull Mutual.

George is interested to promote the benefits of shipping in the international economy and loves the word Hellenic and believes very much to Hellines,to Europe as soon as all the parties are united.