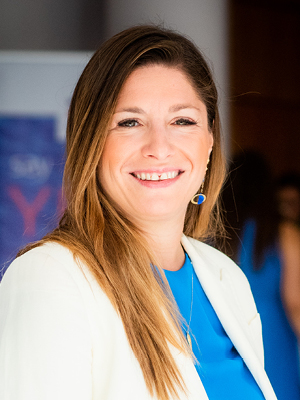 Danai is the managing director of NAVIGATOR SHIPPING CONSULTANTS LTD (www.navigatorltd.gr). Her company represents exclusively in Greece 40 clients (Port Agencies & Towing Companies) based in 120 countries. One of her important achievements is the organization of the Annual NAVIGATOR “The Shipping Decision Makers Forum” since 2001 which is considered to be one of the biggest shipping events gathering about 400 decision makers of the Shipping Community and speakers from all over the world.

Between years 1996 and 2000 she has worked as a Marketing Director in her family businesses known as KEFI TOURS & Forums LTD (www.kefitours.gr) in Athens and as Reservations Manager in MATILDA HOTEL (www.matildahotel.gr) in Zakynthos Island. In KEFI one of her main responsibilities was to organize Forums, Meetings or Events for highly reputable organizations and the excursions of the 20 private schools in Greece.

Her latest venture includes the foundation of the GREEK FOOD OBSESSIONS (www.gfo.gr), a Gourmet culinary company providing the Greek and International food market with high quality Greek gourmet products derived from all over Greece. Greek Food Obsessions has been shortlisted in Hellenic Entrepreneurship Award in April 2012 as one of the best 10 projects out of 295. The company was also selected to compete for the European Business Award 2013-14. In March 2011 she represented Greece in International Visitor Leadership Program (IVLP) “WOMEN IN LEADERSHIP”, which took place in USA amongst 100 women from 92 countries. After her return she created a non-profit organization named “iforU – Greek Mentoring Network” (www.iforu.gr) with another 8 women entrepreneurs, which aims at empowering the mentoring and networking opportunities amongst women entrepreneurs. Through her participation in lectures and seminars as well as through her written articles she has positively affected a vast amount of people and lately she is also concentrated in giving lectures to Universities. She has traveled in different places in order to participate as a speaker in local events and strengthen the women entrepreneurship in the Greek province.

Danai holds a Bachelor of Science in INTERNATIONAL HOSPITALITY AND TOURISM MANAGEMENT from the University of Surrey. She is an advisory board member of the Hellenic Startup Association, and member of Women International Shipping & Trading Association (WISTA), PROPELLER CLUB, SETE (Association of Greek Tourism Enterprises), AMERICAN HELLENIC CHAMBER, BRITISH HELLENIC CHAMBER, EEDE – TOGME, ALUMNI OF STATE OF DEPARTMENT, SEV,THE SHIPPING HALL OF FAME and Honorary Member of the American Farm School.

Danai has been interviewed for the most prominent Greek and International media such as Tradewinds, Kathimerini, Capital TV, Deal News, Deluxe, Naftika Chronika, Naftemporiki, Elnavi, Maritech News, NAFS etc. She has represented Greece at Women International Shipping and Trading Association (WISTA) International Forums in France, Sweden UK and Canada and she has traveled to Georgia in July 2012 in order to establish iforU Georgian Farmers Association. In 2012 and 2013, she represented Greece at the European Commission EQUALITY PAYS OFF BUSINESS Forum and at the European Commission SME SUMMIT WEEK with subject “WOMEN’S ENTREPRENEURSHIP MAKES BUSINESS SENSE”. She was one of the main speakers at International Women Entrepreneur Forum (IWEF) in Turkey, at INVEST FOR THE FUTURE in Poland and in FYROM for the launch of Macedonian Mentoring Network. She has been selected to be one of the 40 European Leaders under 40 for the year 2014 and she was included in PE100 Europe List for 2014. Danai speaks English, French and German and plays tennis and the piano. She loves travelling, reading and swimming. Her favorite motto is “through a crisis you can generate new opportunities”.